"The Best Flour Tortillas for Burritos, Quesadillas, Wraps, and More" 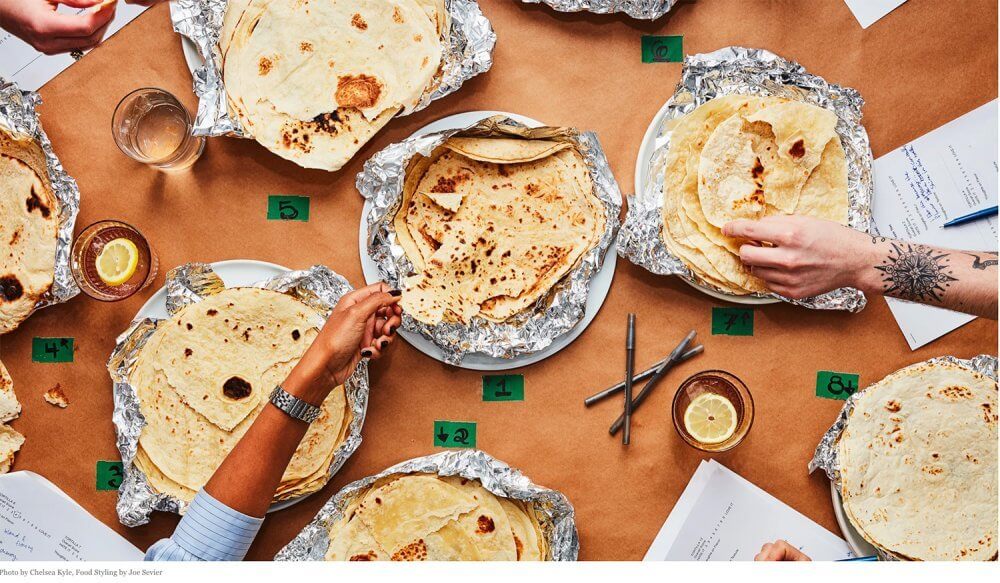 If you ask Epi digital director David Tamarkin, finding the best flour tortillas at the grocery store is a pointless endeavor because corn tortillas are almost always superior. But that’s his opinion. The rest of us sensible people know that there is a time and place for flour tortillas—or more specifically, two times and places: burrito and quesadillas. And that’s why team Epi conducted a taste test of 12 brands of flour tortillas to find the best one available in supermarkets and online.

While we’re big proponents of tasting food plain and unaltered when trying to determine a best-in-category, there is no reason to eat a tortilla straight out of the package. Instead, I toasted each tortilla in a dry ceramic skillet for about 30 seconds per side-or until the tortilla just started to bubble and develop toasty brown spots. I separated each brand into its own pile, wrapped each stock tightly in foil, end slid them into a low oven to keep warm until all the tortillas were ready to taste.

After the first round of tasting, I took the five top-rated tortillas and made burritos for every meal over the course of one weekend to test how well the flavor complemented the fillings and how the tortilla physically held up to being stuffed. (Would each stay intact through the last bite? Stay tuned to find out.)

What We Were Looking For

We choose to taste only white flour tortillas with the primary objective of finding one that tasted great, but as you´ll see, we had a bit of disagreement on what that meant. Deputy editor Anya Hoffman, plus a few others, preferred a plainer tasting tortilla—one that would take a back seat to the flavors with which it was being fluffed; while I represented the camp of tasters who loved the tortillas with a sour edge reminiscent of feasted bread. Either way, we weren’t looking for tortillas that had any trace of uncooked flouriness. Unfortunately, many of them did, even after toasting and steaming inside their foil shells. The best tortilla also had to have the ideal thickness: thin but not so thin that it ripped when rolled into a burrito. It also had to be tender— too many samples were tough and chewy and subsequently got an automatic boot.

Finally, the tortilla had to be the optimal size, because if we’ve wrsppin8 up a burrito, we want to be sure to get our fair share of rice, beans, and cheese on the inside.

Maria and Ricardo’s tortilla fell right in the middle of the plain-to-sour spectrum, pleasing both flavor camps alike. The best thing about these tortillas is that, when toasted, they bubbled evenly so that one spot didn‘t become overly charred while another remained raw-tasting, like some other brands. When rolled into a burrito, the io-inch tortilla stayed remarkably shut, letting not one drop of filling escape. I also tested these tortillas by making a crispy burrito—i.e., rolling a burrito as normal and then searing both the seam side and top in a warm skillet with a bit of oil. (Side note: this step greatly improves any burrito situation.) The crisping step reaffirmed that the tortilla was wonderfully thin and light—the seared bits got supremely crunchy while the sides and ends retained a pleasant chewiness—and while the tortilla held everything in place, it never overwhelmed the fillings.

If you’re looking for a flaky tortilla and don’t mind a little less than surface area than the standard burrito size, go for Tortilla Fresca. Need more tortilla real estate? Opt for Maria and Ricardo’s, whose taco-size tortillas have the exact same list of ingredients as the burrito-size, by the way (which we found out is not common across many of these brands). Like ’em thick? Go for La Tortilla Factory Handmade-Style but know that burritos are not in your near future.

"This local company makes a million Made in Mass. tortillas every day"

"5 Low Carb Tortillas You Can Buy"

"It´s a wrap: Tortillas made with quinoa flour"

"The Best Flour Tortillas for Burritos, Quesadillas, Wraps, and More"